Upcoming musicians have always find it hard to save their tracks online thereby increasing their followers and maximizing their audience. We’ve come with a solution concerning that.

Remember how only a decade ago, to find out who performs a track that you heard on the radio or in the shopping mall, you had to go through three rounds of hell?

Well, fortunately, this time has passed. Shazam was a revolutionary app that helped millions of people to avoid stupid questions and hours of search. If you are not familiar with it, you better go and upload it, to make your life easier and filled with great music.

For artists, this is also a treasure as it is the only tool for track recognition. It is now even a built-in option on Apple devices. Just ask Siri.

Radio stations and record labels are also using it to discover fresh artists, which are interesting to the public. That is because the more times the song is “Shazamed”, the more catchy it is. Thus we see a possibility to get a new hit up in world charts.

Shazam is a new opportunity to become a celebrity. It has charts, categories, and tools for promotion. Furthermore, you can even buy Shazam plays for reaching tops. 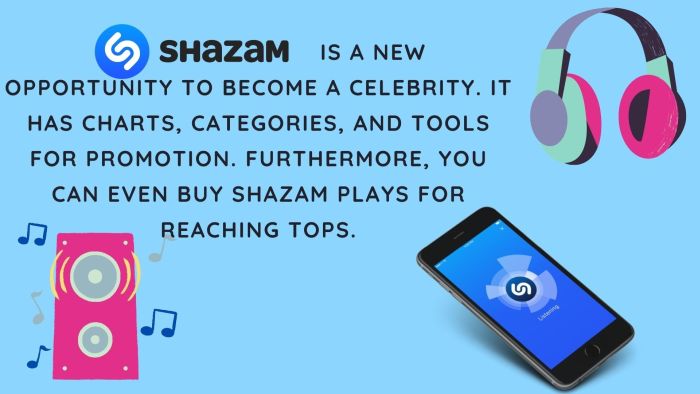 Get Your Music In The App

Luckily, this process is easy-peasy. First of all, you need to upload your tracks to popular music libraries, like Apple Music, Google Play, or Spotify. Also, choose a reliable independent distributor from the list that is offered on the Shazam site (DistroKid, CI, finetunes, etc.), which will actually spread your music within the app.

After that – just relax, a distributor, if chosen wisely, will do the rest. Remember, that nowadays music on Shazam needs to be uploaded only this way, they just don’t accept CDs or mp3. On average, the processing of the song takes around a week, but if you meet any difficulties, you can always reach out to customer support.

You can also add the lyrics of your song (if you have actual lyrics in it) for better recognition. Shazam has a partnership with LyricsFind, so the process is easy.

Adding lyrics to your uploads is essential if you want to win more hearts in your favor. People love singing, and if they like the song, they usually want to know the words at once.

Also, reading the lyrics gives people a better understanding of what is the song about.

Adding information about yourself is a good idea. People usually associate the song with its author very much, and leaving your biography blank can decrease your rates. Shazam distributes bio through ROVI, which also hosts Allmusic services.

As a bit of surprise – you can send an actual letter with the description of your biography that you want to be released. Kinda old school. A

nyway, you can do that with an e-mail as well, so you shouldn’t be concerned. Keep in mind that the information you send can be processed up to a couple of months. So take a deep breath and wait.

What Shazam Won’t Do For You

You have to remember that this is not a streaming app, and it doesn’t have the option of downloading and playing music, as a player.

The only closest feature is the ability to add the track to your music library on Apple devices.

Why Do You Need Shazam After All

For young artists, this app offers a very valuable metric – exposure to the potential fans, and record labels as well.

This is vital as you need to be heard and recognized. This app is a great addition to your overall promotion campaign.

How To Make The Best Of The App

Here we gathered essential tips for nailing the platform:

Shazam is a relatively new tool in the promotion campaigns, but it has proved to be in great help for new artists. As it was stated before, its main feature is exposure, which is extremely important for a young musician.

It also helps to reach out to record companies and producers, who are perfectly aware of the possibility to find out what’s going to be a new hit.

How To Write Expert Content And Copy – And Get More Readers

5 Benefits Of Writing: Why Writers Should Write Every Day