Samsung has been in the game for quite a long while, known for creating awesome devices and known to be a great formidable opponent for Apple products, as it is highly regarded above other Android devices.

This time, Samsung didn’t fail to disappoint it’s fans, it shocked and surprised many and this device promises to touch your heart to make you love everything about it. The Samsung Galaxy S20 Fe device is the phone for you.

The new Samsung Galaxy S20 FE is the fourth phone in the S line this year. That’s a lot of variants, and it doesn’t include the two Note 20 phones and seemingly innumerable A-series phones Samsung also released this year. Trying to figure out which one has the right mix of features and price for you can feel like you need a spreadsheet, an accountant, and an actuary standing by.

Luckily, most of Samsung’s S-series and Note phones have lots of good things going for them: a fast processor, good build quality, nice screens, and decent cameras. I’m not saying you can’t go wrong, but the S20 FE keeps enough of the most important “flagship” parts to make it a great value at $699.

It’s also proof positive that when Samsung wants to turn a phone around quickly, it can. Development began immediately after the original three S20 phones were announced in March 2020 as it became clear the economy would be tanked by the pandemic.

But the Galaxy S20 FE doesn’t feel like a rush job. It has a few high-quality components that will delight while the cheaper parts don’t hurt the experience too much.

The Galaxy S20 FE is built around a 6.5-inch 1080p OLED display. It’s a fully flat screen with bezels that are totally fine but more visible than they are on other S20 devices.

The fact that the screen is “only” 1080p isn’t a problem, even at this size. The thing you get in exchange is a 120Hz high refresh rate, which makes scrolling smoother and some games look better. I’m very pleased to see it on a phone that costs $700, especially since Samsung weirdly left it out of the more expensive Galaxy Note 20. 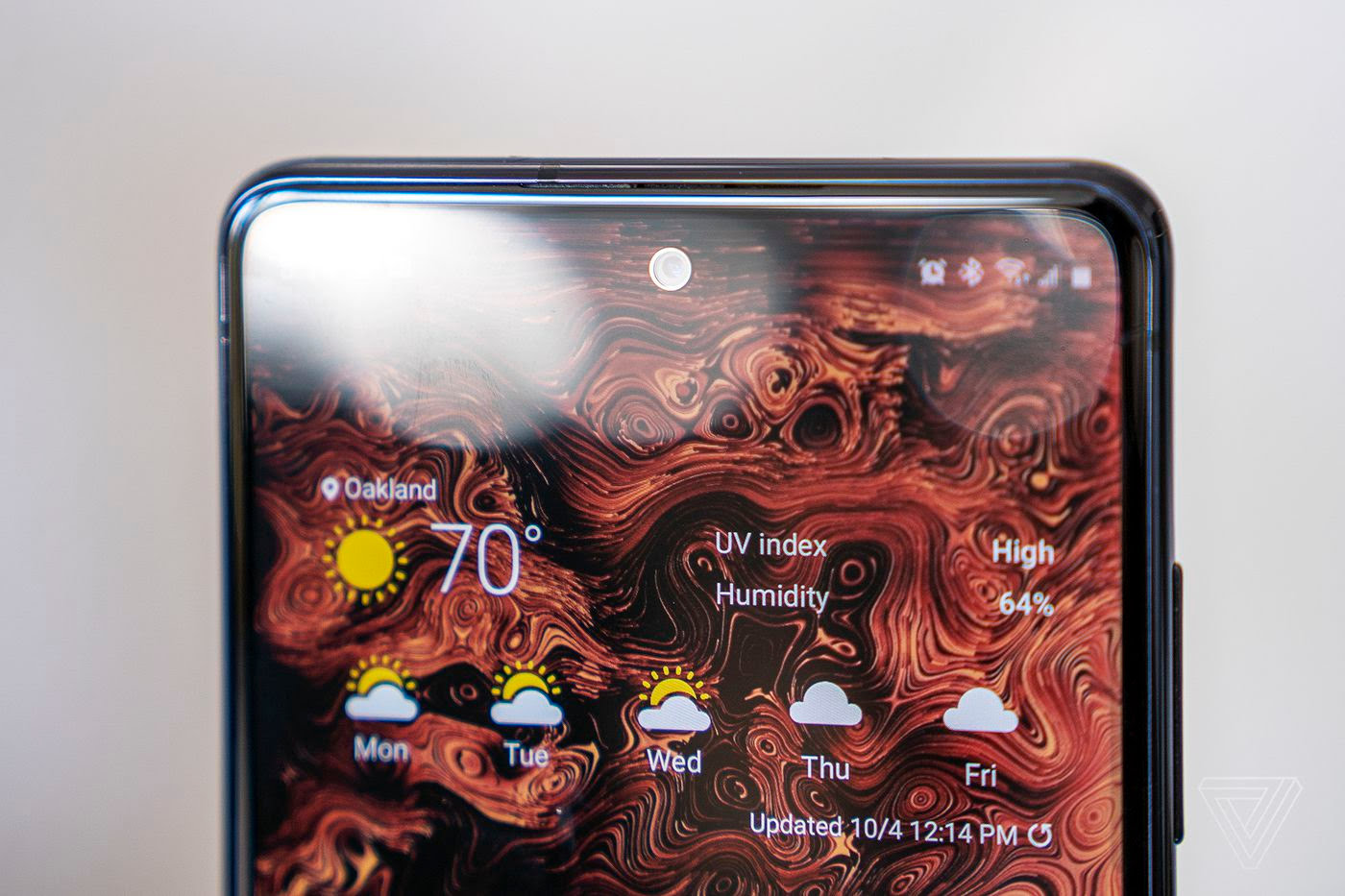 There is a distracting and annoying silver rim around the selfie camera.

The back is plastic, but it feels solid.

Samsung is sticking to its guns on colors and vibrancy on this screen — which means it’s a little overbearing out of the box. Luckily, you can tone it down by hunting down the “natural” screen mode.

But the hardware element that’s most likely to draw criticism is the back of the phone. It’s plastic, but don’t let that throw you. The phone overall still feels sturdy and solid. Samsung is offering it in six different colors, too: navy, lavender, mint, red, white, and orange. They’re all “cloud” colors, which, in Samsung’s parlance, means they have a matte finish.

The S20 FE is a little more squared-off than other S20 phones, but it still mostly feels like it belongs in the family. It’s well-made, and my only real hardware gripe is the chrome ring that surrounds the hole-punch selfie camera. It catches the light all the time and is distracting — and wholly unnecessary. Samsung does this with some A-series phones as well, and I just don’t get it.

It supports wireless charging and fast charging, though the in-box charger doesn’t have enough wattage to juice it up quickly. The battery is plenty large for a phone of this size at 4,500mAh. In my testing, I was getting through as many as two days with moderate use. It should be good for around six hours of screen time in total unless you are doing something really battery-intensive. 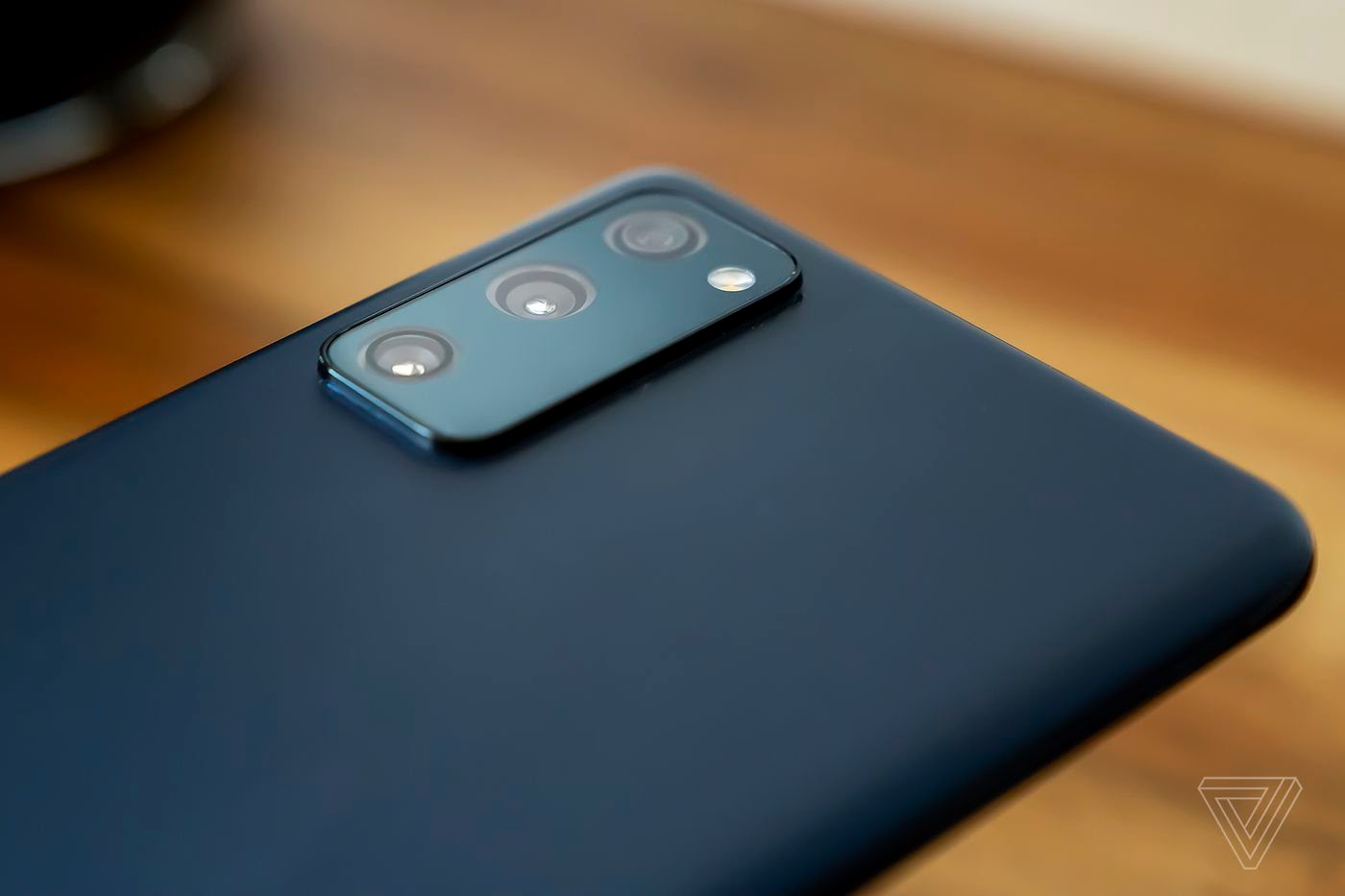 Samsung had to cut costs somewhere, and the camera is one of those places. However, I don’t miss what Samsung dropped at all. Instead of one of Samsung’s newer high-megapixel “ultra” sensors, the S20 FE has three standard 12-megapixel sensors.

That means it gets wide, ultrawide, and telephoto cameras. All three take good shots in good conditions. In night mode, I continue to be impressed with Samsung’s improvements. The S20 FE can’t quite compete head to head against the Pixel or iPhone 11 Pro, but it’s close. Video is also exactly what you’d expect: right down the middle in terms of quality. Unlike other S20 devices, the FE can’t do 8K recording — no big loss.

So the camera holds its own, but it doesn’t stand out in an appreciable way. That out but be where I leave it, but I have some long-running complaints I need to harp on. Samsung is still hanging on to three bad camera habits. None of them are bad enough to be deal-breakers, but they’re worth being aware of. 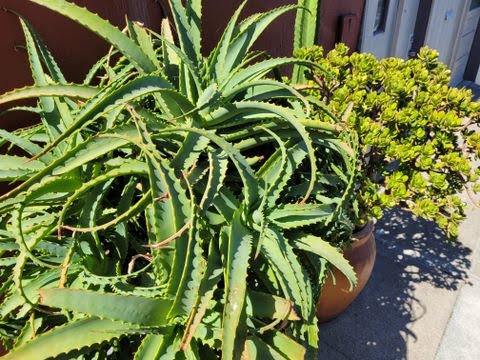 First and most importantly, Samsung still tends to overdo it with brightening photos and cranking up the vibrance. I think that’s probably what a lot of people prefer, but in some lighting conditions, it just makes everything a little neon to my eyes. You can adjust for some of this with the Pro modes and also tone some things down in post.

Secondly, Samsung continues to market its lens as being capable of 30x zoom. It is, technically, but the results at that zoom level look like somebody spilled water on a photocopy of a printout. If you keep the zoom level at 10x or less, you’ll actually be pleased with the results.

Finally, Samsung insists on smoothing faces too much, especially with the 32-megapixel selfie camera. Even if you turn off all of the filters, you’ll see something very different than what your mirror shows you.

As I said, I don’t think any one of these is a reason to avoid the S20 FE. But all three are frustrating because they’re not a result of any hardware shortcomings; they’re just decisions Samsung is making with the software. 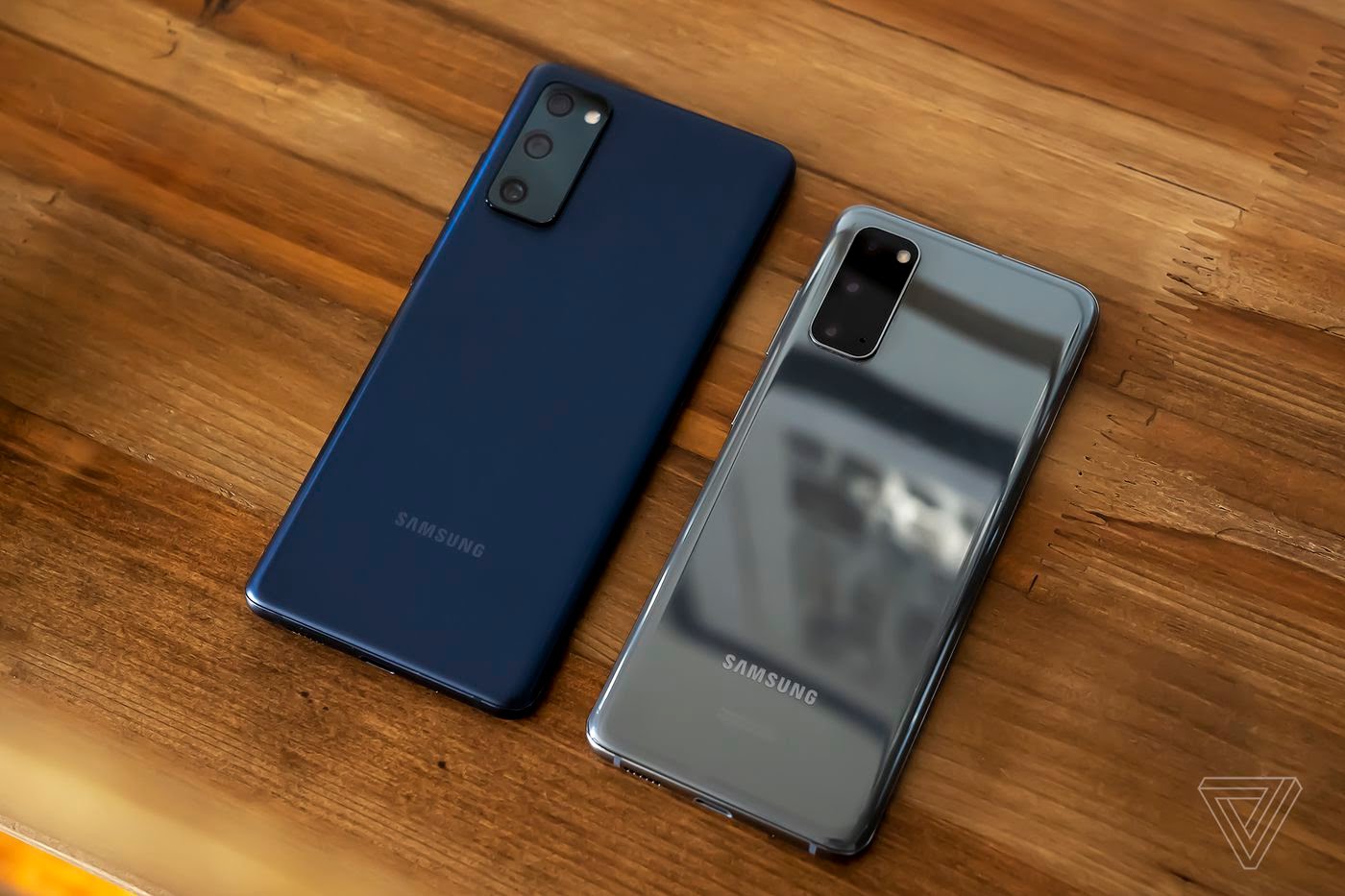 Samsung put in the pieces it knows people will care about most when it comes to performance: a Qualcomm Snapdragon 865 processor and 5G. I don’t think either is a necessity (especially the 5G) for a fast, good phone. Even so, the S20 FE is plenty fast for everything I need.

While we’re on the subject of 5G, I should note that the Verizon version of this phone costs $50 more. That’s because it needs to include the components necessary for Verizon’s mmWave 5G network. A network, I should add, that only works if you are within throwing distance of one of its sporadically visible urban towers.

Though I had no issues with speed, lag, or launch times, I will admit I haven’t pushed this phone to the limits of what some phones can do now. It’s possible that power users could hit the limits of the phone, however. Samsung cut some costs by dropping the RAM from 12GB to 6GB, which can affect multitasking and Samsung’s DeX desktop interface. It also limits the S20 FE to one storage configuration: 128GB, but it’s expandable with microSD.

Samsung’s One UI software is the same on the S20 FE as it is on all the other S20 and Note 20 phones. I enjoy many of its extra features and think its overall design is coherent and even elegant in some places. I also find it endlessly infuriating that Samsung finds little corners of it to stick advertising or prompts to sign up for partner services.

I also don’t like Bixby, which is a bad digital assistant. You can still use Google Assistant, and with a little software tomfoolery, you can even remap a long-press of the power button to Assistant. 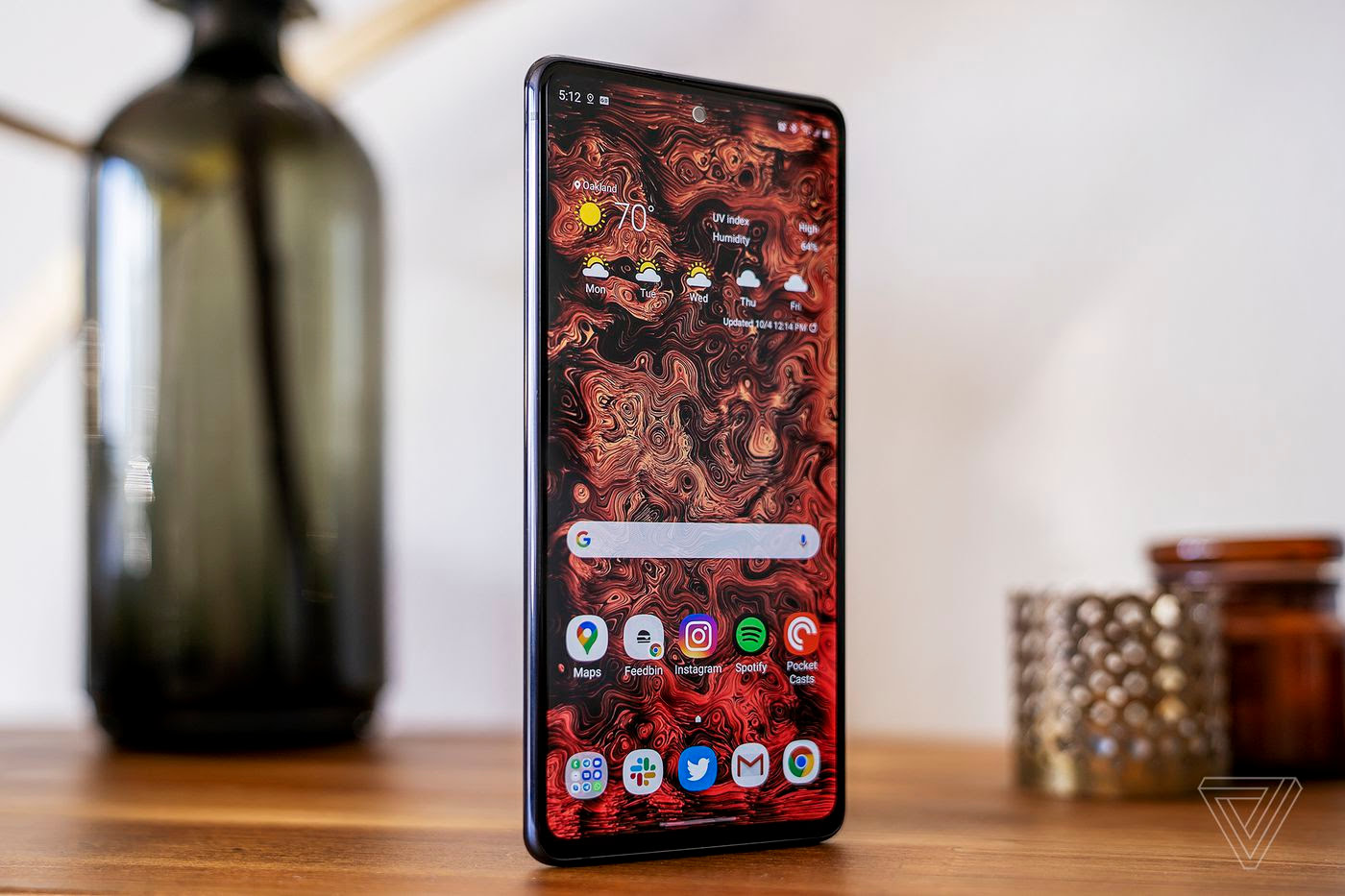 The Samsung Galaxy S20 FE arrives at a very interesting time and as part of an interesting trend. It just barely beats the Google Pixel 5 to market (for the same price) and is also coming ahead of new iPhones. That Pixel is, and at least one of those iPhones will likely be, priced right around the same cost as the Galaxy S20 FE.

Phone companies are waking up to the idea that people who don’t want to spend $1,000 on a phone still want a new phone, not just an older one at a discount. Samsung, as it often does, leads this trend by making sure store shelves can be stacked with its products at every conceivable price point. The S20 FE was rapidly developed not just to meet the economic downturn, but to make sure Samsung has something new in that $699 slot.

And though the Galaxy S20 FE can justifiably be called a rushed-together “parts bin” phone, that doesn’t mean Samsung didn’t make something really solid here. It did. The combination of speed, a big high refresh rate screen, decent battery, competent cameras, and Samsung’s build quality add up to a result that is remarkably close to the pitch: S20 flagship features at a more reasonable price. All the S20 phones share those qualities; the flagships just have a bit more.

Samsung phones also all tend to share another quality: frequent and sometimes substantial discounts. As I and my colleague Dan Seifert have been repeating ad nauseam, it’s always worth waiting to see if the price will come down or if you can buy a step-up phone for the same price.

If you pick up a Galaxy S20 FE, you’ll be happy. But if you can find a regular S20 or S20 Plus for the same price, you’ll be even happier.

Every smart device now requires you to agree to a series of terms and conditions before you can use it — contracts that no one actually reads. It’s impossible for us to read and analyze every single one of these agreements. But we started counting exactly how many times you have to hit “agree” to use devices when we review them since these are agreements most people don’t read and definitely can’t negotiate.

To use the Samsung Galaxy S20 FE, you must agree to:

There are many optional agreements. If you use a carrier-specific version, there will be more of them. Here are just a few:

There may be others. For example, I already had a Samsung account, so I didn’t need to agree to more terms for that. Samsung’s Weather app also has its own privacy policy that may include sharing information with weather.com.

Final tally: there are four mandatory agreements and at least four optional ones.

Why You Should Make Use Of Phone Verification

Determining Whether to Repair or Replace Your Computer